A Moose in Squirrel Hill

The Blight Of Barry Bonds

2010 - Written for the annual songwriting contest run by a guy named Paul ("He's Just This Guy") where you need to incorporate 5 predetermined words and write about a theme.  That year's theme was favorite sports teams; success doesn't make good music, so of course I couldn't write about the Penguins (my true favorite) or Steelers.  That left the Pirates . . .

2001 (I think) - The Book of Ruth, only catchy enough to be sung at Jewish summer camp.

Room For The Soul

2001 - Med School.  Second year.  Neuroscience class.  Refusing to be reduced to neuronal cells, pulses of electricity, and biochemical reactions.  There is more to me - to all of us - than that. 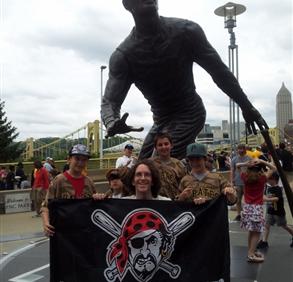 2006 - Sometimes success does make good music.  Written after the birth of child number 2, chock full of images from Jewish folklore - including a line that turns out to contain a reference to child number 3, born six years later.

2000 - From the table by the window at the Bloomfield Bridge Tavern, over beer and pierogies, comes a song about who I am and who I want to be, and every time I sing it feels like victory.

Falling of the Rain

In memory of a friend from long ago, Suzy Zeffren Rauch, whose singing brought joy to many and who knew how to make the best out of a thunderstorm by skipping through the mud and singing